TOPS is your friendly neighborhood store that has what you want, while saving you time and money.

TOPS strives to give customers an exceptional shopping experience. We work hard to ensure that every need is met and offer you convenience, savings and friendly service.
At TOPS, we promise you: 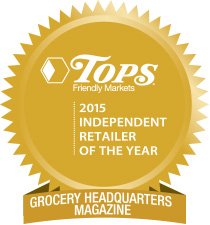 The story of TOPS began in the early 1920s when Ferrante Castellani moved from a village outside of Rome, Italy to Niagara Falls, NY, where he opened his very first grocery store. Ferrante's sons, Armand and Alfred, eventually took over the business and opened two more stores under the name Great Bear Market.

In the 1950s, Armand met Thomas Buscaglia, owner of T.A. Buscaglia Equipment Company. He asked Armand to partner with him and Armand agreed to join Thomas in a joint venture, Niagara Frontier Services. At that time, Savino Nanula was also a key member of their team.

Armand had great passion for food, people and his community. He was also a visionary, experimenting with ideas that were quite advanced for that time. Excited by the growth of modern day "supermarkets", Castellani and Buscaglia partnered with a group of independent Bells store owners, including Alfonse and Leonard DiMino, among others who joined them as key partners in their early and expanding retail grocery enterprise.

In 1962, the group opened its first true modern supermarket, a 25,000 square-foot store on Portage Road in Niagara Falls, NY. That same year, Alfonse DiMino suggested the name TOPS and the team chose that name because they were determined to give customers the best shopping experience possible. In the lingo of the 60s, that meant it was 'tops'.

The 1970s saw TOPS, under the leadership of Armand Castellani and Savino Nanula, continue to grow in Western New York and thrive where competitors struggled. By the mid-70s, the company had expanded into the Rochester area. Store growth continued throughout the next decade and during this time, TOPS opened its first Pennsylvania location in Bradford, PA.

1991 was a pivotal year when TOPS was acquired by Ahold, a major international food retail conglomerate based in the Netherlands. In 2001, TOPS formed an alliance with Giant Food stores, a fellow Ahold company, based in Carlisle, PA. That structure remained in place until 2007 when Ahold announced that they would sell TOPS Markets to Morgan Stanley Private Equity. In the fall of 2007, then president and CEO Frank Curci, led the deal that returned TOPS Markets back to local operation. In 2010, TOPS acquired The Penn Traffic Company, a deal which resulted in TOPS bring 64 new stores into its family. In July 2012, TOPS announced its purchase of 21 Grand Union Family Markets stores.

In April 2013, TOPS introduced a brand-new, specialty food market in Western New York, 10 miles south of Buffalo. This new concept, named Orchard Fresh, gives shoppers a unique combination of specialty, upscale and gourmet foods with a focus on natural and organic, a strong emphasis on the health-conscious consumer, and food items sourced both locally and globally.

Tops Markets. LLC, is headquartered in Williamsville, NY and currently operates 169 full-service supermarkets along with an additional five supermarkets operated by franchisees under the Tops banner. Currently Tops employs over 14,000 associates. Tops is a leading full-service grocery retailer in upstate New York, northern Pennsylvania, and Vermont. 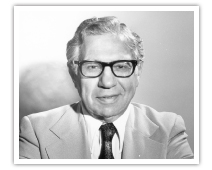 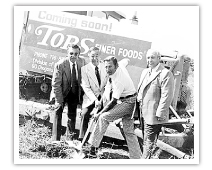 TOPS breaking ground in 1962 for their first truly modern supermarket. 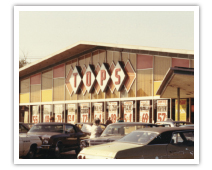 One of the first TOPS locations. 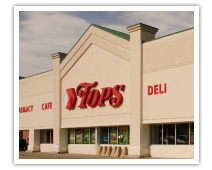 Today, TOPS has stores in New York, Pennsylvania, and Vermont.

TOPS Markets is dedicated to helping the local communities in the markets we serve, and our mission is centered on eradicating hunger and improving the quality of life for children. With the help and compassion of our associates and customers, TOPS has raised more than $7 million for local organizations such as Children's Miracle Network Hospitals, Juvenile Diabetes Research Foundation, Salvation Army and regional food banks, as well as TOPS' own programs-TOPS in Education and Cash for Causes.

At TOPS, we work hard to make sure that we can provide a one-stop shopping experience for our customers. In addition to the wide variety of full-service fresh and grocery departments offered in our store, TOPS operates 61 gas stations, where customers can take advantage of discounts through TOPS GasPoints® program. TOPS also boasts 54 full-service pharmacies in New York and Pennsylvania that are located in store. TOPS pharmacies' $3.99+ Plan Generics Program covers nearly 400 prescriptions for our shoppers, as well as pet medications.